Enlarged men’s breasts in men are often the cause of insecurity, emotional suffering and complexity, especially in the younger men’s population. Gynecomastia – as it is professionally called – affects all generations of the male sex, but the reasons and risks that it carries are different. Many boys will have pronounced breasts in the period of puberty because of the imbalance of the hormone. This problem is often regulated by itself in some period of time.

It is estimated that every third man who is less than forty is somewhat of a problem with gynecomastia, and even half of men older than sixty. The men’s readiness  to address this aesthetic and often health problem has been contributed by public figures John Travolta and Jack Nicholson, who publicly talked about the operation they underwent. 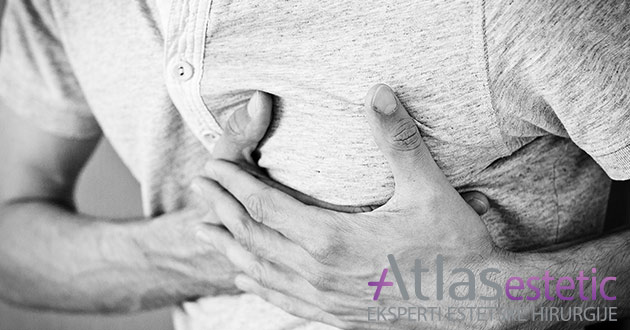 First of all, it is necessary to determine the exact reason for the  breast enlargment and to try to treat the issue. In about a quarter of cases, the exact cause of gynaecomastia can not be determined. Often, breast reduction surgery in men appears as the only solution.

People with gynaecomastia sometimes feel the sensitivity of the breast, as well as pain due to swelling of the gland tissue. Breasts take on a pronounced shape, which resembles female breasts, often with enlarged areola. The appearance of glandular tissue in male breasts is necessary to examine because there is a possibility that it is a disease. Enlarged breasts are once a symptom of endocrine disorders, tumors, liver cirrhosis and other diseases. The risk factors include the use of certain drugs, steroids, alcohol, drugs, overfed food, and some diseases.

Male breast surgery is recommended when the appearance of enlarged breasts for a man is an aesthetic or psychological problem. In Atlas Aesthetic, surgical intervention is only performed in healthy men who have no obesity problem. It is performed mainly under general anesthesia, liposuction, or liposuction combination with a minimal invasive method for the removal of glandular tissue. If there is excess skin in the chest area, additional skin tightening is done.

Before surgery, surgeons will look for a history of disease. As well as an ultrasound or mammogram of the breast and detailed laboratory analysis. During intervention, attention is paid to aesthetic criteria in order to emphasize male characteristics of the breasts, while women are neutralized. The patient in the hospital remains one day. The removal of the sutures is done after ten to fifteen days.

After the intervention, the patient carries a special corset for several weeks, which reduces the swelling and affect the formation of the breast. The pains are usually not strong and can be successfully controlled by the recommended medication. Four weeks after the surgery, it is necessary to abstain from greater physical effort and exercise. The effect of the surgery is visible immediately. The definite appearance of the breast, without the swelling can be seen after a couple of weeks.

Our team of aesthetic surgeons has great  experience in solving this aesthetic and psychological problem. First of all, we care for a healthy human relationship with patients and we think that they deserve an always honest answer to their questions. Atlas Aesthetics is at your disposal for all your questions about breast reduction in men. Schedule your consultations with a surgeon and get rid of the inconvenience caused by “male breasts”!